The Early Music Italia Association (with registered office in Seregno – MB and operational headquarters in Rome), was established in 2002 and has been active and operating throughout the country, particularly in Lombardy, where it has been organizing the Interprovincial Festival for 18 years. BRIANZA CLASSICA (cross-over chamber concerts and guided tours: the most popular and awaited live classical music event in the Provinces of Lecco and Monza – Brianza and Milan).

The Association was born with a broad purpose of spreading music and “classical” instruments through concert seasons, stages, record publications and other works also, with a branch office, in the Lazio region with which it has organized various events also in collaboration with the Municipality and the Province of Rome. In particular, in the center of the “Eternal City”, the Association has organized for three seasons the chamber review ROMA CLASSICA at the Sala dei Papi of the suggestive complex of the Basilica of S. Maria Sopra Minerva and various events in collaboration with Zétema (Municipality of Rome) . More recently, in 2019, he inaugurated, with two concerts, a new Roman exhibition at the central Angelica Library dedicated exclusively to Ancient Music: “ROME GOES BAROQUE”.

In terms of musical promotion, among other things, he has taken on the role of artistic direction and representation of some Italian ensembles. Among these: “Il Cortile delle Palme”, ​​a modern string quartet with a cross-over repertoire, the Ensemble “Festa Rustica”, one of the most accredited vocal groups – instrumental with a Baroque repertoire on copies of ancient instruments of the national and international scene, and the “New Mediterranean Baroque Quartet”, an Italian-Israeli Baroque quartet (two flutes and basso continuo) composed by four well-known specialists in the so-called “Ancient Music” sector President of the Association and Artistic Director of the initiatives promoted by the Association throughout the territory I national is Maestro Giorgio Matteoli, flutist, cellist, conductor and teacher of recorder and ensemble music for ancient instrumentalists at the A. Casella dell’Aquila Conservatory. 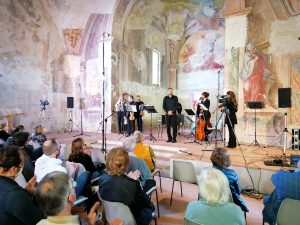 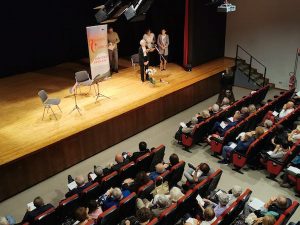 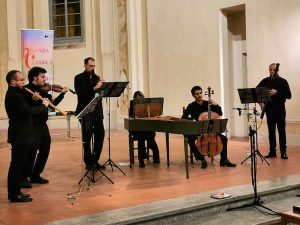 He graduated in cello, recorder and chamber music at the Santa Cecilia Conservatory in Rome, and graduated with full marks in historical music at the University of Rome. In addition to having followed composition and counterpoint studies at the Como Conservatory, he studied conducting at the Milan Conservatory, subsequently following orchestral conducting courses also with the masters D. Pavlov and P. Gelmini. He specializes in the performance of the ancient repertoire, both with the flute and the cello. He holds recitals, concerts and masterclasses in Italy and abroad. Author of musicological articles for the ancient music magazine Orfeo, CD Classic and Amadeus, he is currently full professor of recorder and ensemble music for ancient instruments at the Respighi Conservatory of Latina. He has to his credit a vast and awarded discography for the labels Agorà, Musica immagine, Gaudeamus, Bongiovanni, Pierre Verany, Chandos et cetera.

Graduated in telecommunications engineering, he was Sales Area Manager with consolidated experience gained in the Information Technology, Telecommunications and Energy sectors in companies of national and international importance. He is currently the owner of Rumon S.R.L. a small company operating in the tourism sector. In his professional life he has capitalized on considerable skills developed in the identification of innovative business development projects, in the planning of sales activities and new strategies, in monitoring the market and trends, the behavior of customers and competitors.

After the bachelor’s degree in Politics, she attended the Master in Live Show, Economy and Society at the University of Milano Bicocca. She started to work as press officer at Theater Menotti, then at Space Theater NO'HMA Teresa Pomodoro. Since 2016 she has been collaborating with the Cultural Association CapoTrave/Kilowatt, managed by Lucia Franchi and Luca Ricci, curating the press office for the different activities, such as the Kilowatt Festival and the communication of the European project Be SpectACTive! Since 2019 she has been collaborating with Teatro i of Milan, directed by the actress Federica Fracassi, the dramaturg Francesca Garolla and the stage director Renzo Martinelli. She also leads the communication for Enoteca EscoBrillo in Milan. Since 2018 she collaborates with the press office of the Jazz & Wine of Peace Festival, created in Friuli by the Circolo Controtempo.

She has a bachelor’s degree in art history. In the past years she worked as a press officer at FAI Fondo Ambiente Italiano, Red Communications press office of: Fascino P.g.t. by Maria De Filippi and Maurizio Costanzo, for the label Newtopia by J-Ax and Fedez, the books by Camilla Costanzo and Mara Venier. She also worked for LaPresse press office for: Rai2 and Discovery channels, Il Premio Cairo, the magazine Bell'Italia, for the artist Alberto Fortis and for the Forte Village in Cagliari. Before the press office, she got the chance to know the reality of an editorial team, working at magazines Tv Sorrisi e Canzoni, Telepiù, Guida TV and Il Mio Papa, as editorial secretary and iconographic researcher. Since 2018 she has been working as a freelance with his colleague Maria Gabriella.

Graduated in Modern Literature at the Catholic University of Milan, with a thesis in History of Music, she worked as a press office and / or public relations office for the Teatro Filodrammatici in Milan, the Mozart Italia Association, the Fondazione Gioevale Musicale d'Italia. and - for ten years - for the “Brianza Classica” review of the Early Music Italia Association. He held the role of direct collaborator of the Councilor for Culture of the Province of Milan for three years and also collaborated with the Municipality of Milan. The activity in the field of classical music includes the presentation of over 300 concerts in prestigious venues throughout Italy and collaboration with various institutions as an editor of texts for hall programs or speaker at meetings and conferences. Since March 2010 he has been Assistant to the Direction at the Retirement Home for Musicians - Giuseppe Verdi Foundation in Milan where he also follows the Friends of the Verdi House Association.

Adriana Migliucci, graduated in literature, address demo / ethno / anthropology at the Sapienza University of Rome in 1998, has been working since then as a designer, organizer and cultural promoter. Since 2006 he has founded and curated the Terre Vivaci Association to create, organize and promote activities aimed at enhancing cultural heritage and artistic talents, transforming the territories into Vivacious Lands through ad hoc projects, both its own and other Associations including Early Music Italy.